Keto as a Way of Life

Sign up here to get our weekly recipes & Keto tips by email.

Good BBQ sauce can be challenging to find on Keto.

Most BBQ sauce is full of carbs; sugar, corn syrup, molasses, or some combination of all three.

Most regular BBQ sauces on the market have 16-20 grams of carbohydrates PER TABLESPOON!

If you DO manage to find a Keto or low carb BBQ sauce, it’s light on flavor.

I smoke a LOT of meat. Heck, I’ve tried to smoke just about everything I can think of on my Traeger.

That being said, when we went Keto, we tried every low carb BBQ sauce we could get our hands on. I shouldn’t say they all sucked, but….

They tasted watered-down, and without any real flavor.

Since we couldn’t find a good BBQ sauce to buy, we decided to try some recipes we found on Pinterest and around the web.

There were some decent BBQ sauces there, but none of them lived up to my picky taste buds.

So, Rebecca and I decided to make our own.

I used to make a Jack Daniel’s BBQ sauce before we went Keto, so I went through my notes and found that recipe. Of course, it not only had brown sugar and molasses in it, but it also contained Soy Sauce, which is a Keto No-No.

Additionally, one of the primary ingredients in it was Ketchup, which brought even more sugar to the party.

Obviously, I couldn’t use that recipe as a 1:1 conversion, but it served as a good framework to start putting together some flavors.

I had to get pretty creative with my ingredient substitutions, so take a look at the Ingredient Notes on this page to see why I used certain items.

I like to use Jack Daniels because the flavor works in this sauce and I almost always have a bottle on hand. Honestly, though, I’ve used different bourbons to great effect in this recipe, and spicier Irish whiskeys make a good sauce as well.

The key is to use a darker, blended whiskey. The clear stuff won’t give you good flavor, single malt whiskeys are just too expensive to cook with, and rum tends to be a bit too sweet in this particular recipe.

I cook with whiskey kind of a lot because of the way alchohol enhances flavors. Since alcohol is a volatile chemical, it grabs hold of the aromas and flavors in food and scatters them out more, making them expand and be more active.

That means food will smell and taste more like itself that it would otherwise. The flavor is enhanced.

I should probably write a whole post on this at some point!

You can use any low carb ketchup in this recipe, but since it’s so easy to make a good Keto Ketchup yourself, you may as well start there.

Check out the easy-to-make Keto Ketchup recipe we posted on Keto Ginger.

Our Keto Ketchup is sweet, slightly spicy, easy to make and low carb. So you can enjoy the King of Condiments on Keto!

We prefer red wine vinegar in this recipe because of its milder acidity and flavor compliments the sweetness of the sauce.

If you follow our links, you’ll find the brands we use. And you can order these vinegars from Amazon, but they’re both inexpensive and easy to get at most grocery stores.

Red Wine Vinegar adds the acid that most dishes need to balance out the flavors.

Red wine vinegar provides some additional flavor as well without adding any carbs like a Balsamic vinegar might.

We like the Pompeian brand because it tastes great, it's easy to find, and usually reasonably priced.

Golden Monkfruit is the perfect Keto substitute for brown sugar.

It has the sweet, caramel-like flavor with a hint of molasses that you would expect from brown sugar. But it has none of the carbs!

Monkfruit, in all its forms, has become our Keto sweetener of choice.

Interested in learning a little more about sweeteners and where they rank for Keto?

We put together a handy chart of 55 sweeteners commonly used on the market today. The chart shows you which sweeteners are actually sugar, which ones are bad chemicals or natural, where they land on the Glycemic Index and more.

We also rank each sweetener on the list as Good, Bad, or Ugly for Keto.

That brings us to the biggest challenge this recipe presented. How do you replace an ingredient with such a unique flavor profile as molasses? Well, the Golden Monkfruit helps, but there’s a depth of flavor that is just missing without molasses.

On a whim, as I was tinkering with this recipe, I turned to an ingredient that offers a nice, savory note to the sauce, and lends a richness to the flavor that was a little surprising.

Also known as brewer's yeast, this is an inactive yeast that is normally used to add a slightly toasted, mildly cheesy flavor to a recipe.

A lot of people use nutritional yeast in salads for texture and flavor.

I use it in my Jack Daniels BBQ Sauce where it rounds out the flavor, giving it depth and character while picking up some of the slack left by the absence of the not so keto molasses.

While the nutritional yeast got us pretty close, there was still something missing. There’s an almost bitter, or burnt flavor, to molasses; similar in nature to a strong cup of coffee…. Or…. to chocolate!

Using cocoa powder (affiliate link) was less of a whim and more of a stroke of genius (if I do say so myself…. and I do!)

In truth, the idea was inspired by a Mexican mole sauce.

It doesn’t take much, but adding a touch of cocoa powder fills in the rest of the flavor gap and gives us a well-rounded, rich sauce that can stand up to the bold flavor of smoked meat.

Coconut Aminos are a great substitute for soy sauce and can be used as a 1:1 replacement in most recipes.

Made from the aged sap of coconut blossums and salt, coconut aminos have a milder, less salty flavor than soy sauce.

Soy is bad in general because it contains phytoestrogens, which may cause hormonal problems in both men and women. Soy also contains substances that inhibit mineral absorbtion and can even interfere with normal Thyroid function. Since Keto is all about regulating these things, it's best to avoid soy altogether.

I use Franks Red Hot (affiliate link) because I like the flavor. Again, this is preference.

I’ve used Tabasco sauce before and we liked it just the same. Don’t feel like you need to go buy a special bottle of hot sauce to add here. Use whatever you have on hand if you like the flavor.

This is an accent flavor that really just adds a bit of character to your BBQ sauce.

The rest of the ingredients are pretty straight forward.

We use a couple different meat delivery services for grass fed beef and hormone free meat products, but for our briskets and pork butts, the best place we’ve found is Porter Road right here in Nashville!

I like supporting a local business, AND these guys know their stuff! We have loved everything we’ve ordered from there, and they’ve been a real pleasure to do business with; so much so that I reached out to them to  become an affiliate. They graciously accepted my application, and I’m proud to recommend them.

Do yourself a favor and buy your next brisket or pork should/butt from Porter Road. You can thank me for the suggestion later. 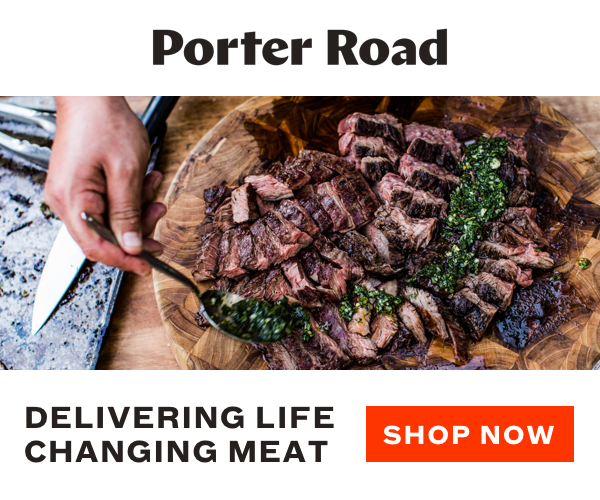 Notes on the Method

This is an easy recipe to make. There may be a lot of ingredients, but putting them together is simple. There’s really only a couple things to keep in mind.

Since nutritional yeast normally comes in a sort of flake form (that resembles fish food), I find that it works best in this recipe to give it a whirl in a spice/coffee grinder.

Alton Brown calls this device a Doppletasker; a tool that is terrible at doing what it is meant to do, but terrific at performing another task.

For the most part, coffee grinders are bad at grinding coffee, but they're great for herbs and spices!

So that's what we use ours for.

You don't have to spend a fortune on this tool either. The coffee/spice grinder we got on Amazon had 5 stars, was inexpensive and has worked wonderfully!

Mix all the dry ingredients together:

And don’t cook the sauce for too long after you add the dry ingredients. Monk Fruit isn’t like sugar. Sugar needs heat and time to dissolve in liquid. Monk Fruit doesn’t really need that. While it will stand up to heat pretty well, if you cook it took long, it will eventually start forming crystals and you’ll get a slightly grainy sauce.

As long as you pay special attention to those steps, this recipe will come together easily for you.

We hope you enjoy our Keto Jack Daniel’s BBQ Sauce. If you give this recipe a try, please let us know how it works out for you. Please drop us a line in the comments below, send us an email at info@ketoginger.com or join us on our Facebook Page where we share and discuss Keto recipes all the time.

We post new recipes and Keto tips weekly, so if you don’t want to miss those, sign up for our weekly Email by clicking HERE.

Sweet, tangy and delicious. You won't know this BBQ is low carb.

Serve with pulled pork, brisket or any other dish you’d serve with BBQ sauce.

Enjoy sweet, spicy Italian Sausage on Keto without carby fillers. Control the flavor, spice, & quality when you make it yourself with our easy, yummy recipe.

What is a Keto Everything Breakfast Muffin? A low carb cross between an English Muffin and Everything Bagel! Also, full of flavor and perfect for breakfast sandwiches!

Our low carb white pizza sauce recipe is creamy, delicious, and simple to make with only 5 ingredients. This may be the easiest keto recipe ever!

We added a simple twist to the ingredients and techniques of a standard fathead dough to make our Easy Keto Flatbread Recipe. You gotta try it.

Effects of Keto on Your Immune System

Keto & low carb eating have many health benefits. One of those may be a boost to your immune system; something to keep in mind during Cold & Flu season.