Keto as a Way of Life

Sign up here to get our weekly recipes & Keto tips by email.

Not Actually from Scotland?

Surprisingly, not everyone has heard of a Scotch Egg. Not surprising, however, is that the people who have heard of them, love the things. They’re like the original low carb hot pocket! As I began to write this post, I found myself curious about their origins. So I did a little research on the sausage wrapped, culinary jewels known as Scotch Eggs.

It turns out, Scotch Eggs are not from Scotland at all; but from England. They arrived on the scene at some point in the early 1900’s. The nuanced ‘who’ and ‘where’ is a matter of debate in the UK, however. It’s one of those favored food items that’s been around long enough for everyone to have developed their own recipes and ways of eating them. Now a popular picnic food in the UK, Scotch Eggs can be found in supermarkets, little shops, and motorway service stations (that’s what they call convenience stores there) all over the place.

Scotch Eggs in the US?

Scotch Eggs are not quite so common in the US where they tend only to be served as pub food, particularly in Irish and English style bars. In fact, that’s how we discovered them.

Rebecca and I were having a pint of Guinness (this was Pre Keto Life for us) at our favorite Irish place in Nashville, TN; McNamara’s.

We’d seen Scotch Eggs on the menu for a while, but it wasn’t until we saw someone else order them that we determined to give them a try.

Of course, we fell in love with them because they’re awesome.

Can You Make Them at Home?

As food lovers and DIYers, we determined to try to make them at home. We’ve done so several times since, and have landed on some pretty good recipes and methods.

It wasn’t until we went full on ‘Low Carb High Fat’ lifestyle that we decided to try and make Keto Scotch Eggs that we really hit the deliciousness gold mine.

Getting these right is a delicate mix of having good ingredients, getting the methods correct and nailing your cook times.

Sure, they can be a little bit of a challenge to pull off right, but not every recipe is going to be super easy. Combining the methods that we learned from previous trial-and-error attempts with an effort to make these completely carb free, we’ve developed a recipe that we’re proud to share.

We hope you enjoy it as much as we do!

These are pretty simple. Eggs, Sausage and Bacon…. oh yeah, we wrap ours in bacon because, why not?

We source our meat from Butcher Box, especially when it’s the star of the show like it is in Scotch Eggs.

A Nashville-based business that sources their meat from select local farmers.

They process all their products themselves and sell those products online to make great meat available nationwide.

We were attracted to them at first because they're local to us.

We continue to support Porter Road because their service and products are amazing! 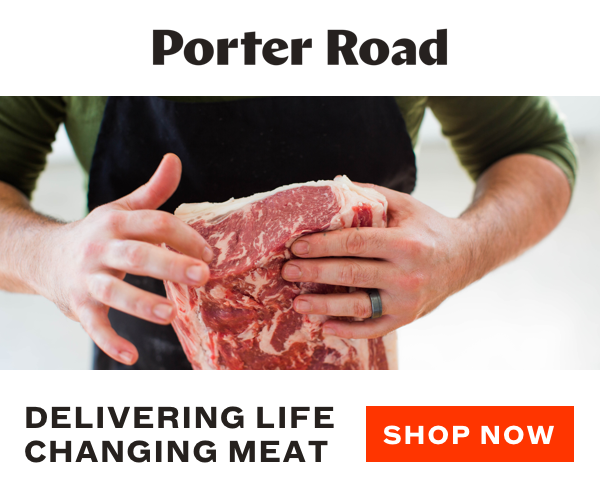 You don’t have to use the exact tools we use, but they’re certainly helpful. If you don’t have them, it’s fairly easy to improvise some of these steps.

NOTE: Good woods to use for smoking Scotch Eggs are Apple, Oak, and Hickory. Maple and Cherry are good too if you like a milder flavor.

The smoker/grill I use is the Traeger Texas Elite 34 pellet grill. I can’t tell you enough how much we love this bad boy!

I've cooked everything from cake to ribs on mine. Yes... I said cake! (keto cake, of course)

It makes smoking meats easy, and gets hot enough to grill as well. It's been well worth every penny for us.

You NEED one of these in your backyard.

They're conveniently all listed on this one page on Amazon.

There's nothing like the flavor that hardwood smoke adds to food. They all have their own character, and I love every. single. one.

The first thing you do is simply soft boil the eggs. If you have an Instant Pot, this is simple. There’s a setting for it. To keep this post from getting long, I’m going to assume you know how to soft boil an egg the old fashioned way in a plain old pot as well. If you don’t have an Instant Pot, it’s okay to go Old School.

After seeing all he Instant Pot recipes on Pinterest, we decided to see what all the fuss was about.

Holy cow! If you don’t have one of these yet, it’s time to get one. It’s crazy easy to use and makes whipping up family meals a breeze.

It takes the time out of long meal prep too. Think "crock pot" but faster!

PRO TIP: As soon as you take the eggs out of the hot water, put them in an ice bath to stop the cooking. This helps tighten up the white and stops the egg from continuing to cook internally, thus preserving a nice, runny yolk.

Next, peel the eggs. If you place an egg into a mason jar and give it a gentle shake, it breaks the shell up perfectly and it will come right off. Just go easy. This is the part Rebecca always has to do because I tend to destroy the eggs with my clumsy, bear-sized paws as I attempt to peel them.

Wrap Them in Sausage

Once you have the eggs free of their shells, it’s time to wrap them in sausage. The trick to this is to lay out a piece of plastic wrap  that’s big enough to wrap around an egg. Place about two ounces of sausage in the middle of the plastic and press it into a thin, round patty. It’s tough to gauge dimensions here. You want your patty large enough that you think it will just wrap and cover an egg.

Place one of your soft boiled eggs in the middle of the sausage patty and pick up the corners and edges of the plastic wrap. This will make it much easier to form the sausage around the egg. Be gentle here because it’s easy to crush a soft boiled egg. (I know from experience!) This is another one of those steps Rebecca has to do because of my awkward clumsiness.

When you have the sausage wrapped around the egg, gently seal the meat all the way around so that none of the eggs is showing.

This is the part where most people will batter the Scotch Egg, adding breadcrumbs or other carb-loaded ingredients and then deep fry the thing in vegetable (probably hydrogenated!) oil. Neither of these things are good for Keto. So this is the part where we wrapped our Eggs in Bacon. It took about four full slices to wrap each egg. There’s no magic formula here. Just make sure the egg is wrapped thouroughly.

After your eggs are all bacon-wrapped, they’re ready to go on the heat. We’ve done this on the smoker, the grill, and in the oven, so any of those methods work. Obviously, the smoker and grill will impart a little extra flavor, so that’s our preference.

Check the temperate: With all three of these methods, you can use an instant read thermometer. Just be careful not to puncture too far into the egg. The temperature of the sausage is what’s important anyway, so just pierce your Scotch Egg with a probe deep enough to make sure your sausage reaches 145 degrees F.

Stop trying to guess when your meat is done. When you learn to cook by temperature, you’ll never go back.

An instant read thermometer isn’t just for the grill. I use this one all the time in the kitchen.

My favorite part is eating them. If you did everything right, when you cut into your egg, you will be rewarded with a warm, runny yolk that creates the perfect, rich sauce to compliment the meat. They’re amazing with a bit of spicy mustard and serve well as a main course or side dish. I agree with our UK friends who hold these as the perfect picnic snack. With the macros these Scotch Eggs have, they are perfect for those Keto dieters who are fat adapted. They may take a little time to some practice to get right, but in my humble opinion, they are TOTALLY worth it!

We hope you enjoy this Keto Scotch Eggs Recipe. If you give this recipe a try, please let us know how it works out for you. Please drop us a line in the comments below, send us an email at info@ketoginger.com or join us on our Facebook Page where we share and discuss Keto recipes all the time.

We post new recipes and Keto tips weekly, so if you don’t want to miss those, sign up for our weekly Email by clicking HERE.

Scotch Eggs are a savory snack or meal for holidays, game day, or even as a savory fat bomb. They are amazingly tasty no matter when you have them.

Chocolate Strawberry Cake. If you ask me, aside from “I love you” there aren’t three words that embody the same feeling better. We say “I Love You” in Keto

These Keto Maple Breakfast Sandwich Muffins are a yummy & easy way to make a low carb breakfast that you can take with you on the go.

Chicken salad is an easy, ‘make on the weekend’ dish that makes weekday lunches super easy. Our recipe is simple, low carb, and yummy with a bit of a twist.

Cornbread & Chili go together like peanut butter & jelly. Our easy keto cornbread recipe has half the carbs of traditional cornbread & all the flavor.

Butter is so simple to make & nothing tastes as good as the fresh homemade brand. Butter is a staple for a low carb healthy fat diet so give ours a try!